The Future of BioManufacturing: The Promise of Perfusion

As novel types of Biologics have been developed, changes in biomanufacturing approaches have been running in parallel with the intention of maximising yield and lowering production costs. Evolution Global have identified 8 key production trends that will shape the Future of BioManufacturing, the fourth of which is The Promise of Perfusion.

At its core, perfusion relies upon some means of maintaining cells within the culture vessel allowing spent media containing product to pass through for harvesting, with an inflow of fresh media to replenish the culture and continue manufacture in optimal homeostatic conditions.

THE PROS AND CONS OF PERFUSION

Perfusion cell culture was initially developed in the 1980’s as a manufacturing solution for unstable proteins that were susceptible to aggregation and degradation resulting in reduced product quality. Its potential was overshadowed by significant increases in yield titres for traditional batch and fed-batch cell-culture processes, resulting in perfusion being mainly disregarded over the next two decades, outside the need for it in the production of unstable proteins.

During perfusion, the manufacture of cell culture can proceed for many weeks to months. The product is frequently removed from the bioreactor, reducing exposure to increasing concentrations of the toxic by-products that are generated during the cell culture process, thereby circumventing degradation concerns, particularly for sensitive/labile biologics. Additionally, the replacement of expended media with fresh material also prevents build-up of toxic by-products, and allows for operation of cell culture under optimised, steady state conditions, leading to more consistent processes and thus by inference product quality.

Due to its fundamental principles, perfusion processes offer milder culture conditions, including reduced shear forces due to calmer mixing. This also facilitates more consistent protein expression, glycosylation patterns and reduced production of undesired variants. An important consequence of higher and more consistent product quality is the fact that downstream purification processes can be less complex.

Despite the advantages listed above, the overall implementation of perfusion reactors has been limited to date. However, there have been a number of successful commercial developments involving large biopharmaceutical companies such as:

Others are also likely but the actual production methods have not been explicitly reported due to commercial sensitivity.

Several market drivers strongly point to an increased need to consider and adopt the approach, including:

1. The global market for protein-based therapeutics continues to drive the demand for cheaper, higher volume production methods at all scales (Clinical to Market).

3. Complex molecules such as bi- and tri-specific antibodies, and other unnaturally occurring glycoproteins show increased potential as effective therapeutics. Such proteins are often difficult to express using traditional approaches with low titres and increased sensitivity to slight variations in environmental conditions.

As a rule, perfusion processes characteristically function with much higher efficiencies, expressed as grams/L of bioreactor working volume per day, than can be attained in batch or fed-batch processes. A consequence of the higher productivities is the potential to allow the use of smaller bioreactors to produce similar product quantities compared to much large traditional batch fed processes. An additional advantage is the fact that perfusion can also be used to manufacture cell therapies which, at this point in time, constitute 8% of treatments in clinical development.

A particular attraction to the perfusion approach is the simplification of increased scale manufacture. Processes can be scaled-out, using multiple units of identical equipment systems maintaining the optimised process conditions which were created during development. This strategy can obviate the considerable risks associated with scale up technology transfer in traditional systems.

Planning models looking at costs suggest that the approach is more financially efficient too. This is due to the fact that productivities are higher and overall investment costs are lower when compared to the same numbers of fed-batch processes. The cost benefit is largely related to higher productivity correlating with higher cell densities, which are commonly 10 to 100-fold higher than in fed batch processes.

Key industry players known to be developing and/or refining existing in-house perfusion approaches are outlined below: 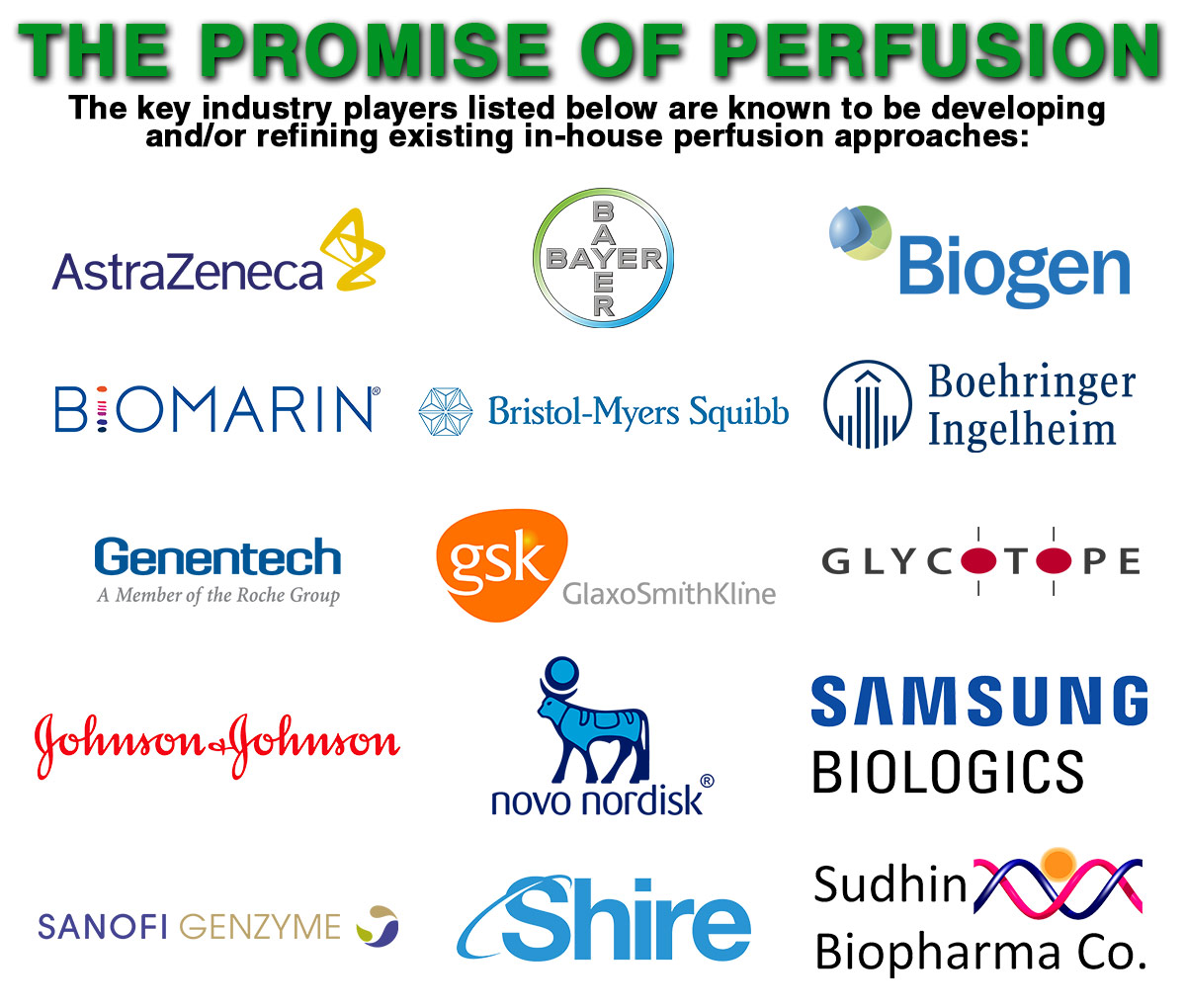 The mechanism of cell retention is critical within the bioreactor vessel, options include gravity and acoustic based cell settlers, spin filters, centrifuges, cross-flow filters, alternating tangential-flow filters and vortex-flow filters. The two main perfusion techniques are microcarrier-based processes (e.g., iCELLis™ from Pall/ATMI) and those in which cells flow across the membrane through which product is harvested (e.g., GE Healthcare’s hollow fibre microfiltration).

Perfusion operations are media intensive, using anywhere between 1.5 to 3 times the volume of the bioreactor daily. A 500L process, can result in the requirement of tens of thousands of litres of media over the course of the culture campaign. This an area of opportunity for biomanufacturing media suppliers such as GE, Lonza, Merck and ThermoFisher. Of these major players, Merck would appear to be first to market with the May 2017 launch of EX-CELL Advanced HD Perfusion Medium, marketed as the as the first off-the-shelf, high-density cell culture media that supports perfusion processes at low rates.

Merck believes that 75% of the market will move to Perfusion for seed and or full-scale production over time and this development will be a key enabler of this change.

Currently the market largely develops its own media, focusing on aspects such as creating lower levels of the inhibitory waste products such as lactate and ammonia. This has involved the use of glutamine alternatives (Ala-Gln dipeptide) or albumin which can improve cell metabolic efficiency and reduce the generation of waste products. Glutamine alternatives include Glutagro (Corning/Mediatech) and Glutamax (ThermoFisher) with recombinant albumin from players such as InVitria, Kerry, Merck, Thermo Fisher, Mediatech/Corning & Merck. In some cases, the custom media is actually Albumin-free such as the formulation developed by Pfizer for ReFacto AF (human coagulation factor VIII).

Whilst there is no doubt that perfusion holds great promise and certainly regulators such as the FDA are highly supportive, there are still hurdles that require to be overcome. Questions remain as to the best technological approach i.e. Hollow Fibre Perfusion whilst offering excellent homeostatic production conditions is subject to cellular fouling which hitherto has limited the scale up potential.

Whilst many of the issues will be addressable with intensive development, the volume of media containing product which will require chromatographic purification is still a major challenge. Capture columns need to be cycled at a high frequency, otherwise it may be necessary to accommodate large storage volumes. This is rarely an option because of product instability when dealing with enzymes and other recombinant proteins. Unstable products such as these must be purified or stabilised rather than stored for a batch type chromatographic processing.

It is likely that improvements in emerging separation systems such as Periodic Countercurrent Chromatography (PCC), Annular Chromatography (AC) and High-performance counter current chromatography (HPCCC) will be required. Companies such as Genzyme/Sanofi are known to be actively exploring these technologies.

Just where this technology will be placed is an interesting question in terms of actual production. A perfusion process takes more time (up to 60 days) compared to a fed-batch process (about 14 days). Whilst all major CDMOs in the market offer perfusion to some extent, it does not fit their business models to the same degree as batch manufacture. This does not mean that they will not consider provision of such services if the demand increases, but rather it will be a question of the economic viability of doing so. This challenge may push developers to consider in house manufacture rather than outsourcing.

Please use the buttons below to navigate through Evolution Global’s “Future of BioManufacturing” series. The next key trend examines the impact of Cell Line Engineering.