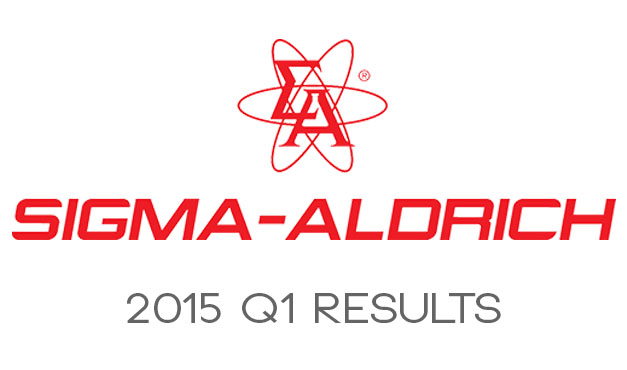 Sigma-Aldrich Corporation have posted strong Q1 2015 results ahead of their planned merger with Merck later this year. Sigma reported quarterly sales of $676 million, with an organic growth rate of 5%. Changes in foreign currency exchange rates decreased sales by 8%, and shareholders will receive a quarterly dividend of $0.23 per share.

Commenting on performance in the first quarter of 2015, President and CEO Rakesh Sachdev said, “I am pleased to report that our teams delivered solid organic sales growth with contribution from all business units and major geographies.  Despite a significant negative sales impact from unfavorable year-over-year changes in foreign currency exchange rates, the Company expanded adjusted operating margin and grew adjusted operating income.

We officially opened our state-of-the-art dry powder media manufacturing facility in Irvine, Scotland, which now serves as the European counterpart to the Lenexa, Kansas, Center of Excellence for cell culture media manufacture and supply.  In April, we opened our state-of-the-art Cell Culture Technical Center in Singapore to support our biopharmaceutical customers in this fast growing region.

Mr. Sachdev concluded, “Our teams are successfully executing the Company’s growth initiatives, and we are excited about the opportunity to join forces with Merck KGaA of Darmstadt, Germany.  We continue to expect the transaction to close in mid-2015, subject to receipt of certain antitrust and government approvals and other customary closing conditions.”

You can read Sigma-Aldrich’s full press release on their website.