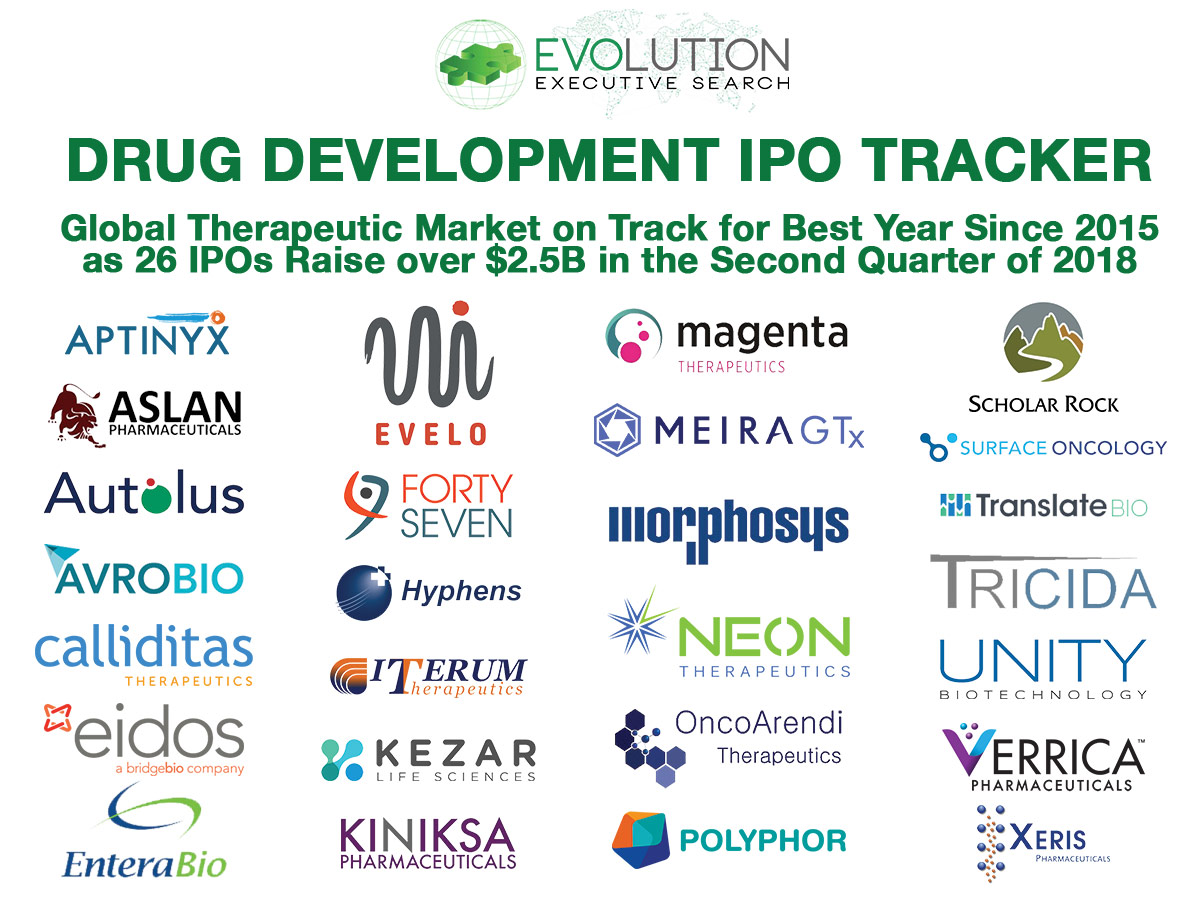 The Drug Development IPO market enjoyed a strong second quarter, with over $2.54B raised by 26 companies across the globe. 85% of companies that listed during Q2 elected to do so on the NASDAQ exchange, which continues to provide a lucrative market for international companies. Drug developers focused on biologics raised the most capital during Q2, followed closely by small molecule therapeutics and immunotherapies. From a disease perspective oncology-focused companies continue to raise the most capital, followed by autoimmune/metabolic/endocrine and genetic/orphan treatments.

San Francisco-based Tricida had the largest IPO of the quarter, raising $222.3M in an oversubscribed NASDAQ IPO to support the ongoing phase 3 clinical trials of its lead product candidate TRC101, a non-absorbed polymer drug designed to treat metabolic acidosis in patients with chronic kidney disease. Of the seven international companies that chose to list on the NASDAQ, German antibody specialists Morphosys AG raised the most capital with an impressive $207.83M IPO.

The lack of drug development IPOs on the EURONEXT and London Stock Exchange/AIM is unsurprising, with several European companies electing to list on the NASDAQ instead of opting for EU-based markets. Economic and political uncertainty has undoubtedly affected investor sentiment, with the looming threat of Brexit weighing heavily. British companies Autolus Therapeutics and Meiragtx Holdings both chose to IPO stateside, raising $150M and $75M, respectively.

Swiss company Polyphor AG bucked this trend, raising $165.4M through the SIX exchange to support its pipeline of macrocycle drugs that aim to address antibiotic resistance and enhance therapy outcomes in cancer.

Elsewhere in Europe, Swedish mid-cap company Calliditas Therapeutics (formerly known as Pharmalink AB) raised $75M through the NASDAQ OMX Stockholm Main Market in order to accelerate the development of their lead product candidate Nefecon for the treatment of IgA nephropathy.

In one of the smallest IPOs of the quarter Polish biotech OncoArendi Therapeutics, which has a pipeline of inflammatory and oncology drugs, raised $17.16M through the Warsaw SE.

What Type of Therapeutics are Being Developed?

The hype surrounding CRISPR has failed to translate to the IPO market, with the last successful CRISPR-focused IPO taking place in October 2016 (CRISPR Therapeutics raising $56M).

In contrast, there has been a total of 11 Immunotherapy-focused companies that have IPO’d thus far in 2018, raising over $1.06B. This represents a significant increase over previous years, with Immunotherapy IPOs raising a combined total of $515.54M in 2017 and $173.6M in 2016. This trend is likely to continue in the third quarter, with Massachusetts-based biotech Replimune Group recently setting terms for a $101M IPO.

Which Disease Categories are Raising the Most Capital?

Unsurprisingly, oncology-focused companies continue to attract the most capital with regards to disease categories. A stunning 46% of companies that IPO’d during Q2 are developing therapeutics to treat cancer, raising a combined total of $1.24B. Significant capital continues to flow into companies with a focus on treating Autoimmune/Metabolic/Endocrine diseases, with 10 companies raising $976.84M during Q2.

The global drug development IPO market has continued to build on the momentum established after a strong 2017 in which 74 companies IPO’d across 15 global exchanges, raising a combined total of over $7.28B. Thus far in 2018, 44 companies have IPO’d raising a combined total of $4.2B. Based on half-year figures, it is projected that the global therapeutic IPO market will raise upwards of $8.39B by EOY-2018, which represents a 15.3% YOY increase in funds raised.

With the lure of big pharma M&A activity presenting a viable exit strategy for small and mid-cap drug development companies, investors are increasingly intrigued by the potential for solid returns. Investor outlook for the remainder of 2018 is bullish, with several promising companies seeking to capitalise on a resurgent drug development IPO market in the coming months.

This article is comprised of selected data from Evolution Bioscience’s exclusive Therapeutic IPO Data Visualisation, which has been updated with all drug development IPOs from 2012 until the end of Q2-2018. In the last six years a total of 449 drug development companies have raised over $37.5B, with an average IPO value of $83.59M.