0
Illumina’s NovaSeq Platform Targets the $100 Human Genome, but do they Risk Self-Cannibalisation?
11 January 2017
Next

0
Lonza Accelerates its “Healthcare Continuum” Strategy with $5.5B Acquisition of Capsugel
27 January 2017
January 12, 2017 by evolution in Evolution Infographics 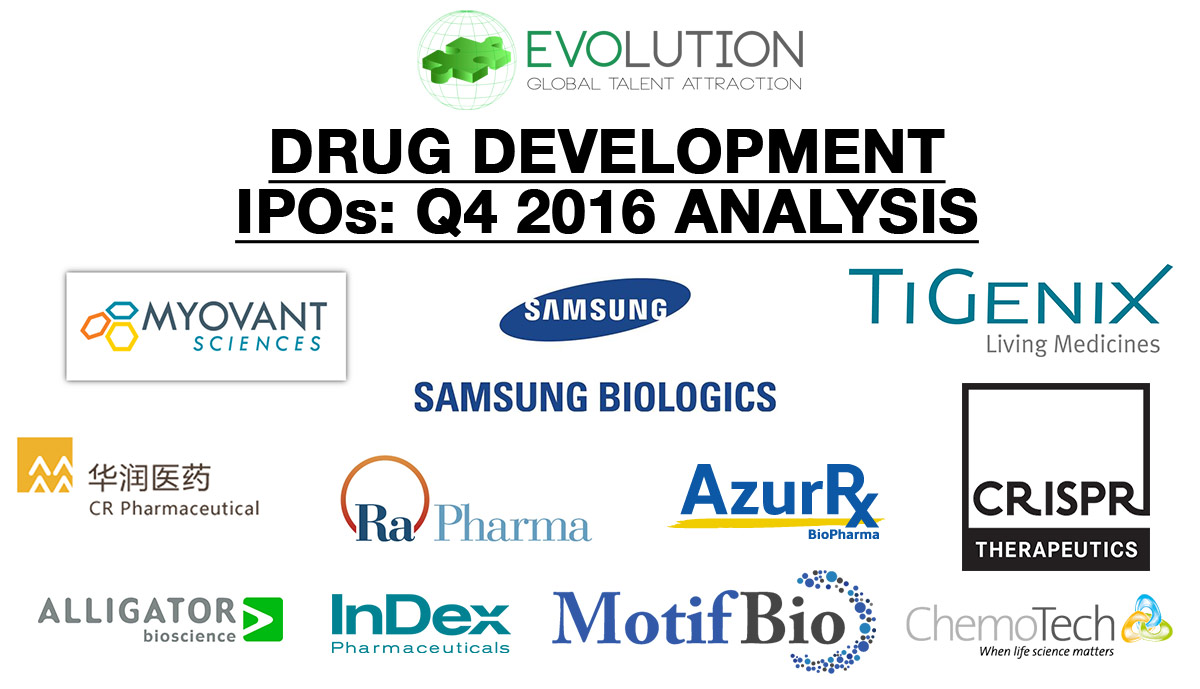 Whilst the depression in the value and frequency of Drug Development IPOs on the NASDAQ market continued throughout the fourth quarter of 2016, a combined total of more than $4.28B was raised globally, making it the highest ever quarter on record. Of note is the fact that the top two IPOs, South Korea-based Samsung BioLogics and Chinese company CR Pharma, accounted for more than 86% of all funds raised globally.

As a rule, IPOs involving contract biologic manufacture are generally excluded from Evolution Bioscience’s IPO Tracker. However, Samsung BioLogics qualifies based on the fact it is not a pure-play CDMO, but also a treatment producer/developer as their Bioepis subsidiary produces several biosimilars at various stages of regulatory acceptance worldwide.

CR Pharma was part of the state-owned conglomerate China Resources Holdings Co., and the company is one of the largest drug distributors in China. It manufactures Western pharmaceuticals, traditional Chinese medicine preparations and health supplements. This IPO can be viewed as a broader thrust by China’s pharmaceuticals industry to change from a position of supply of cheap generics supplied on a regional basis into higher-value products that have global potential.

During Q4-2016, NASDAQ accounted for five IPOs and NYSE one IPO, though only two of the companies to list on these exchanges, RA Pharmaceuticals & AzurRx, are headquartered in the United States. This highlights the continuing trend of foreign companies listings on US markets, with notable Q4 NASDAQ listings including Swiss-based Crispr Therapeutics, UK-based Motif Bio and Belgian company TiGenix.

A trend that is likely to continue in 2017 will be more large value IPOs from Asian players who have established businesses and who wish to tap into capital for expansion and drug development purposes. An additional consequence may well include outbound M&A, licensing and collaborations with Western companies are perceived to have best-in-class early or late stage assets and or productive discovery technologies. Whilst data is not available for the year end yet, in the first 10 months of 2016, the value of overseas mergers and acquisitions involving Chinese firms exceeded $200 billion, double the figure for the whole of 2015. Whilst the focus on such activity has been other target sectors such as industrials, the fact proves that the strategy is one that is being pursued by Chinese companies in general.

Going forward into 2017, it’s likely that therapeutic IPOs in the NASDAQ will remain moribund, at least until the uncertainty over the new US administration is clarified.

This article is comprised of selected data from Evolution Bioscience’s exclusive Therapeutic IPO Data Visualisation, which compiles global market data from 2012 onwards, offering a comprehensive historical analysis of trends in biopharmaceutical drug development. You can view the fully-interactive data visualisation by clicking on the button below: