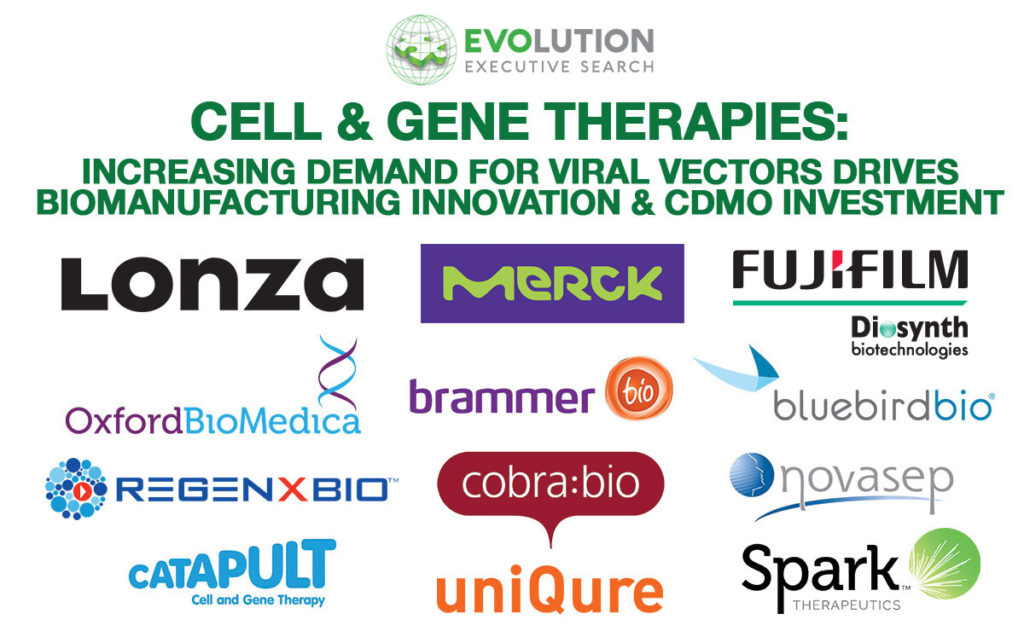 Cell and gene therapies (CGTs) offer an unprecedented opportunity to treat diseases for which existing interventions are inadequate, potentially offering cures for previously terminal illnesses. However, several challenges have arisen for CGT developers and manufacturing partners due to the complex and time consuming processes involved. One of the primary manufacturing challenges currently bottlenecking the industry is the increasing demand for viral vectors.

Evolution analysed all 209 active interventional FDA clinical trials involving cell and gene therapies. For each clinical trial, we outlined whether the therapy was allogeneic or autologous, and identified the vectors used. For autologous therapies undergoing clinical trials, we also examined the cell lines used.

Our analysis provides a holistic view of the rapidly evolving cell and gene therapy industry, offering bioproduction companies and contract development and manufacturing organisations an insight into the future requirements of their customers.

The first step in both direct and cell-based gene therapy is the process of packaging a therapeutic transgene into the appropriate delivery vehicle, such as a viral vector or plasmid. Following transduction, the host cell line is expanded to produce sufficient vector concentrations. In direct delivery, the therapeutic transgenes are then injected directly into target tissues (in vivo). The process for cell-based gene therapies is more complex, requiring isolation and ex vivo cultivation of the target cells before they can be genetically modified, expanded and enriched for re-infusion into the patient.

Due to the complexity of their manufacturing process, cell and gene therapies are likely to be significantly more expensive to produce when compared to traditional small molecule therapeutics or biologics. Cell & gene therapy drug developers require highly pure and biologically active viral vectors to effectively insert modified gene(s) into a patient regardless of whether the therapy is allogeneic and autologous.

Plasmid DNAs offer a non-viral alternative for gene delivery, boasting a strong safety profile, low toxicity and the ability to delivery larger package sizes. However, plasmid DNA is limited by a number of biological barriers, including degradation, endosomal attack and renal clearance issues.

Across all 209 trials analysed by Evolution 42.1% utilise an adeno-associated viral [AAV] vector; followed by lentiviruses (24.9%), retroviruses (13.4%), and adenoviruses (8.6%). Twelve clinical trials use naturally occurring plasmids as a vector to deliver genes of interest.

Adenoviruses were first proposed as vectors for gene therapy over 20 years ago, however their popularity for clinical applications has diminished over time largely due to their high immunogenicity, small insert size and complex vector design. Adeno-associated viral vectors (AAVs) are currently favoured, particularly for allogeneic approaches, due to their low immunogenicity, broad host range and low pathogenicity. The world’s first approved gene therapy (Uniqure’s Glybera) utilises an AAV1 vector to treat hereditary lipoprotein lipase deficiency (LPLD). 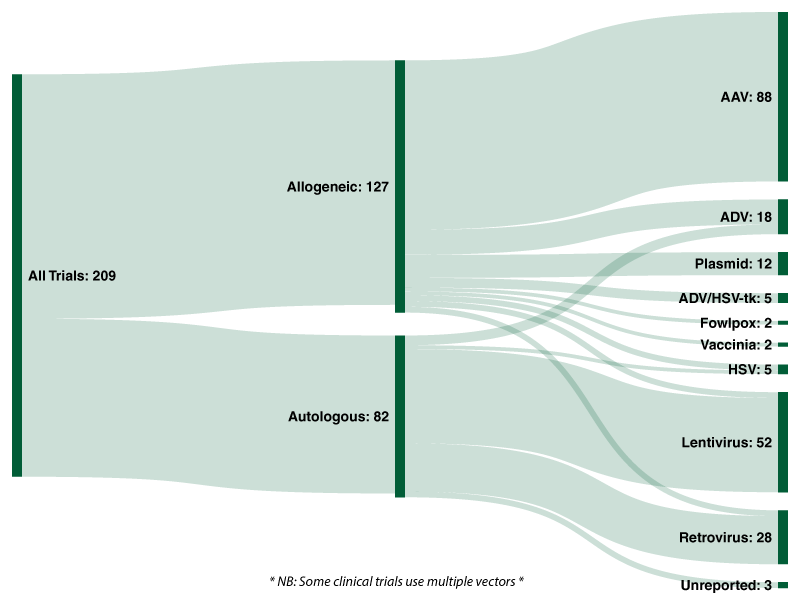 Of the 127 allogeneic trials analysed by Evolution, over two-thirds (69.3%) utilise an adeno-associated viral vector, followed by adenoviruses (10.2%), plasmids (9.4%) and ADV/HSV-tk (3.9%). Lentiviruses, retroviruses and herpes simplex viruses were each used in three clinical trials for allogeneic cell/gene therapies, representing 2.4% each.

With regards to the 82 autologous cell/gene therapies currently undergoing clinical trials, 59.8% utilise a lentivirus and 30.5% utilise a retrovirus. In total, 74 of the 82 active trials analysed by Evolution utilise either a lentiviral or retroviral vector. Five (6.1%) active trials utilise an adenoviral vector and two (2.4%) utilise an HSV vector. In stark contrast to allogeneic approaches, adeno-associated vectors (AAV) and plasmids are not utilised in any of the ongoing autologous trials.

Lentiviruses are a subclass of retroviruses and are comprised of an envelope, a capsid and an RNA genome. In the transduced cell, the RNA genome is reverse-transcribed in DNA and is subsequently integrated into the genome of the transduced cell. Lentiviruses have become increasingly attractive for clinical applications due to their ability to efficiently and effectively transduce non-proliferating cells such as CD34+ stem cells. Novartis’ Kymriah, the first approved CAR-T cell therapy, utilises a lentiviral vector produced by British company Oxford BioMedica.

Further analysis of the 82 autologous cell/gene therapies currently undergoing clinical trials reveals that the most common cell type used are CD34+ cells, which are used in 44% of the trials.

The production of viral vectors is highly complex and requires both upstream and downstream processing in order to produce biologically active vectors that meet rigorous regulatory requirements regarding purity, potency and safety. Each type of vector requires a bespoke approach to manufacturing and purification. Manufacturing processes for viral vectors are predominantly based on the use of mammalian cells.

With regards to large-scale biomanufacturing, there are several significant challenges when scaling up adherent-cell systems. As such, many drug developers are utilising large-scale equipment such as stainless steel or single-use bioreactor systems in favour of small-scale lab equipment such as t-flasks.

The gene therapies currently on the market are focused on rare diseases affecting a relatively small number of cells within the body, and the treatments are suitable for only a small subset of patients. However, as the industry continues to advance, there will be a growing demand to produce gene therapies made with a much higher volume of viral vectors and on a much larger scale.

Increasing demand for viral vector manufacturing capabilities has resulted in significant bottlenecks for drug developers. Whilst the manufacturing process for a batch of viral vectors only takes a few weeks, the task of partnering with a CDMO and scaling up production to commercial-level batches takes months. With capable CDMO partners oversubscribed, drug developers face increasing challenges, costs and delays.

Contract development and manufacturing organisations such as Lonza, Fujifilm Diosynth, Merck & Brammer Bio have identified the gaps in the market and are aggressively expanding their production capacity in order to meet demand. In April 2018, Lonza opened the world’s largest dedicated cell & gene therapy manufacturing facility in Texas.

Rather than fully relying upon external CDMO partners, US drug developer bluebird bio has opted for a diversified approach. Bluebird bio intends to manufacture its own lentiviral vectors in a newly acquired facility in North Carolina. In addition to manufacturing their own vectors, the company has partnered with both MilliporeSigma (Merck) and Lonza for additional manufacturing capabilities.

The manufacture of viral vectors for cell and gene therapies is considered to be one of the most complex and resource-intensive process in biologics manufacturing. With eleven genetically modified therapies currently on the market and 209 active FDA interventional clinical trials already in progress, the demand for viral vectors is anticipated to increase significantly in the coming years. A recent MarketsandMarkets research study predicts that “the viral vector manufacturing market is projected to reach USD $815.8M by 2023 from USD $327.8M in 2018.”

In addition to increasing physical capacity, developers and manufacturers of cell and gene therapies are looking to novel technologies and process improvements to drive down costs. This includes the use of modular factories and disposable/single-use technologies and the development of automated closed systems for CGT processes. CDMOs such as Lonza (Ibex Solutions) and Merck (Provantage End-to-End Solutions) have adopted a holistic approach that spans the preclinical to commercial stages.

Both developers and manufacturers of cell and gene therapies are actively investing in the infrastructure that will be required to support the current pipeline. Competition for viral vector manufacturing capacity is driving innovation across several fronts, and continued ingenuity and cooperation will be required if cell and gene therapies are to reach their transformative potential.

Data sourced from clinicaltrials.gov in January 2019. For access to the refined data, please contact Evolution using the form below.