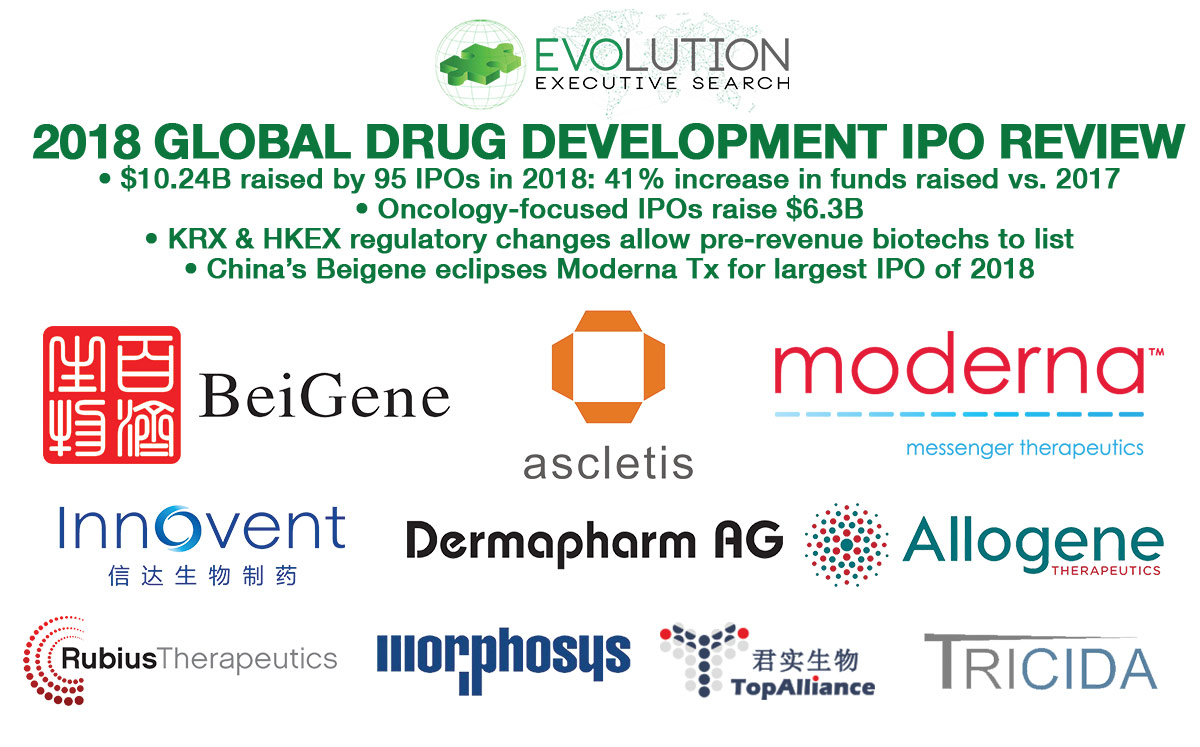 The Drug Development IPO market enjoyed a strong year in 2018, with over $10.24B raised by 95 companies across 15 global exchanges. When compared to 2017, this marks a 28% increase in the frequency of IPOs and a 41% increase in the total amount of money raised. The results represent a significant surpassing of 2015, which was the best prior year on record.

Whilst the EMEA region was significantly down in 2018 compared to 2017, it is important to note that 9 EMEA-incorporated companies listed on the US-based NASDAQ this year, raising $709.37M. This is a continuing trend that is driven by the greater potential for fundraising in the United States relative to Europe.

In terms of 2018 IPOs, the top ten listings are responsible for 41% of the financial values raised. The top ten IPOs of 2018 can be viewed in chart 1 below:

Whilst several analysts and publications have erroneously asserted that Moderna Therapeutics‘ $604.35M IPO was the largest of the year, Beijing-based company Beigene claimed the top spot with a $903M IPO on the HKEX. Asia Pacific markets now account for 27% of the money raised with regards to global drug development IPOs, as highlighted in table 3 below:

The increases are driven in part by changes to regulations in vital APAC markets, allowing companies not yet generating profit to become publicly traded. Prior to this change, APAC-based pre-revenue biotechs often opted to raise funds through a NASDAQ IPO. The recent regulatory change by Hong Kong Stock Exchange (HKEX) offers pre-revenue biotechs with an alternative path to raise funds, which several companies have already taken advantage of.

South Korea’s KRX is the latest exchange to adopt this mechanism. This resulted in 5 Korean IPOs in Q4-18 (Hana Pharm, Eutilex, ABL Bio, PharmAbcine, Cellivery Therapeutics) raising $274.01M, with several more already in the pipeline for 2019.

Whilst treatment approaches involving Small Molecules ($4.09B) remain the top class in 2018, Biologics ($3.96B) are approaching equivalence. 2018 was the best year on record for Gene Therapy-focused companies, which raised a total of $1.22B compared to a combined total of $2.1B from 2012 to 2017.

2018 is the strongest year on record for drug development IPOs, and given the current pipeline of companies seeking to list, this trend is expected to continue in 2019. As a result of relaxed HKEX & KRX regulations, it is expected that the trend of APAC-based companies listing on the NASDAQ market will continue to decline throughout 2019 as APAC companies elect to list locally, rather than in the United States.

This article is comprised of selected data from Evolution Bioscience’s exclusive Therapeutic IPO Data Visualisation, which has been updated with all drug development IPOs from 2012 until the end of 2018. In the last six years a total of 502 drug development companies have raised over $43.71B, with an average IPO value of $87.07M.