2016 US Venture Capital Investment into Life Sciences Companies: An Analysis by Evolution Global 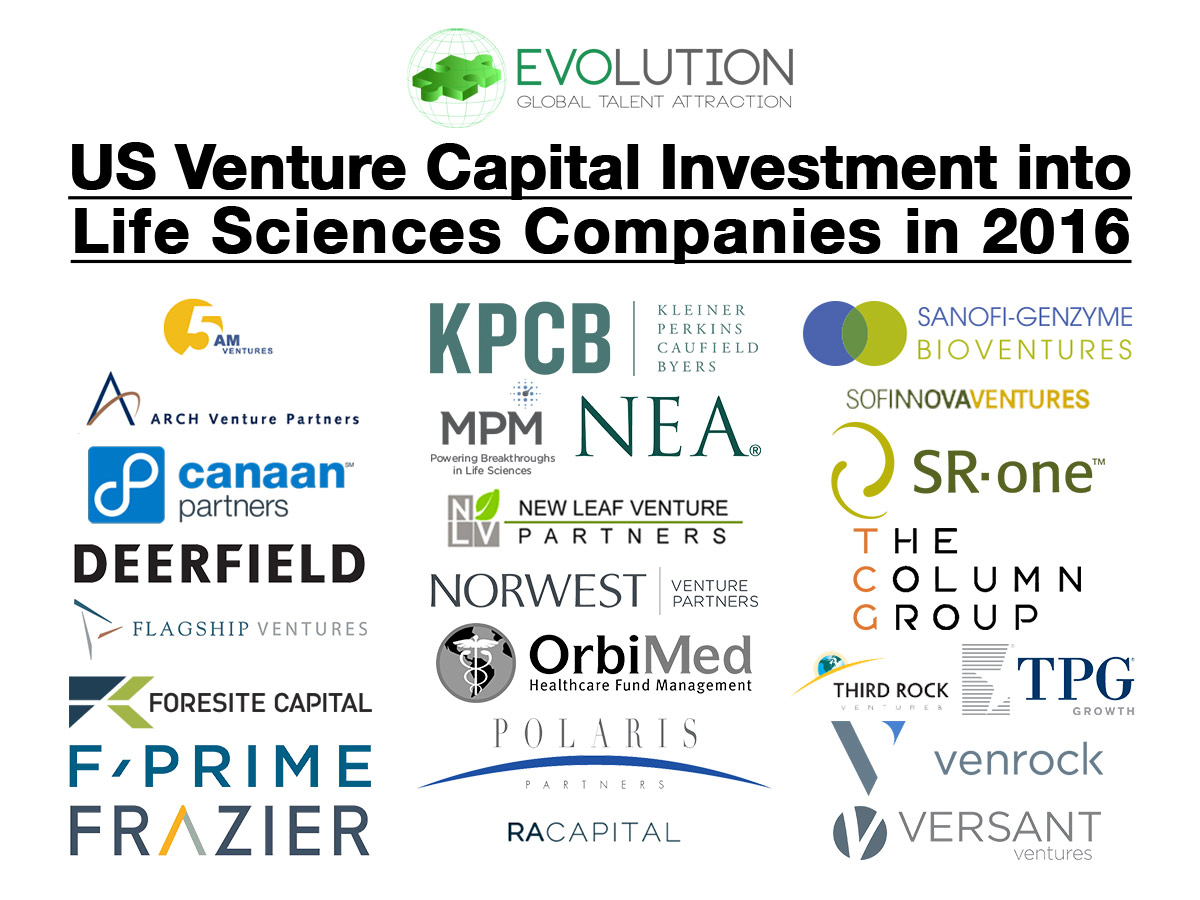 In order to elucidate the focus of Venture Capital funding in the Biotechnology sector this year, Evolution Analysts have assessed the deals carried out by the Top 25 US Venture Capital firms from the beginning of the year to the end of July 2016. Our analysis collected data across all investment levels from Series-level to Equity Arrangements. For companies involved in the ongoing development of therapeutics, the disease focus and type of treatment was analysed.

Whilst financial figures of Biotechnology start-ups are relatively easy to access, specific information regarding investment by Venture Capital firms is rarely reported. Collecting information regarding VC Investment into the Biotechnology industry remains obfuscated by the secretive nature of both the financial investment firms and R&D-focused start-up companies grappling with intellectual property concerns. Analysis by BIO indicates that 2015 was the best year on record for US Venture Capital with just under $7B raised, driven partly by strong funding of oncology and neurodegenerative disease companies.

Given that historical FDA attrition rates indicate that Small Molecule therapies are less likely to be approved than Monoclonal Antibodies, one would expect VC investment to be focused on companies that are developing therapies that are more likely to be approved. As such, industry analysts have predicted a decline in VC investment into Small Molecule-focused companies. Evolution Bioscience’s analysis of 2016 VC funding seeks to test this hypothesis to determine the current trends influencing capital investment into Life Sciences companies.

Of the 91 Venture Capital deals carried out during this time frame, 68% were focused on companies involved in Human Therapeutics. 13% of deals involved investment in Medical Device companies, followed by Diagnostics & Personalised Medicine (8%), Research Tools (4%), Services (4%), AgBio (1%) and Other (1%).

32% of the companies analysed are involved in the development of Small Molecule treatments. Indicating that despite the ongoing rise of Biologics, Small Molecules remain the dominant single treatment type. As expected, Monoclonal Antibodies and Antibody Drug Conjugates are the second most dominant category with a combined total of 16%. Whilst only 8% of companies are involved in Gene Editing and Gene Therapy, Evolution anticipate that this number will grow as the technology becomes more robust.

Given that a Small Molecule drug is less likely to successfully progress through clinical trials when compared to a mAB therapy, analysts have previously predicted a downturn in early-stage investment in Life Sciences Companies involved in the development of Small Molecules. Evolution Bioscience’s analysis of recent VC activity highlights that this prediction has failed to materialise, instead indicating that the variance in clinical trials attrition rates across therapy types has not had a significant impact on the flow of VC funding in 2016. Despite the incredible hype surrounding Immunotherapies and other Biologics, companies focused on the development of Small Molecule therapeutics remain an attractive proposition for Venture Capital investors.